Several new University of Otago buildings have been constructed to 5 Star Green Building ratings: rainwater harvesting, grey water for flushing toilets, and lots of other energy efficiency features. This seems very laudable, except I’ve been extremely dubious about the merit of the shower water heat exchangers in the Hunter Centre. 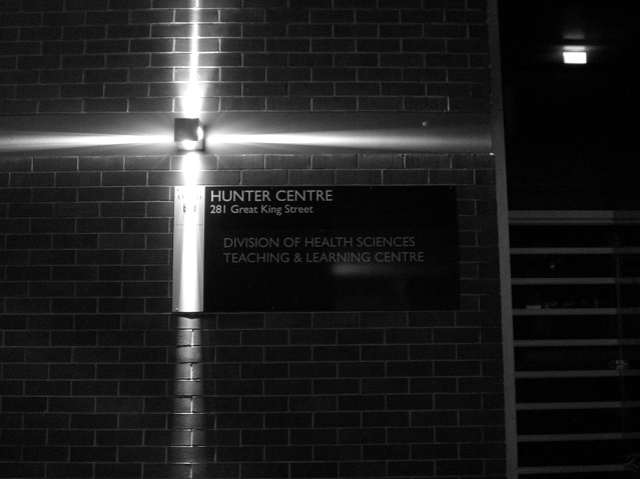 The idea is that the warm water going down the drain pre-heats the water going to the shower, so less energy is used to heat that water for the same warmth of shower. This seems like a fantastic and practical idea, and according to the propaganda of the people that sell them, can easily save 25-40% of hot water heating costs (GFX, Vaportec). Except who showers in a building full of tutorial rooms? In fact, the demand has been so overwhelming, that the showerheads in the Hunter Centre have been removed.

In contrast to solar hot water ($5000-$10,000) or hot water heat pumps ($5000), a heat exchanger for the grey water from the shower is closer to $700. They can be easily retrofitted to many existing houses (you merely need underfloor access; they are more efficient installed vertically, but can be installed horizontally), but can also be used in conjunction with solar or heat pump systems — and would effectively reduce the size of system that needs to be installed. They are also entirely compatible with gas hot water systems.

Simple, easy to install, and comparatively cheap. I would challenge the Dunedin City Council to not just provide loans for their installation, but also to see if they can get a discount for a bulk order. I’m ready to forgive the Hunter Centre: Even if no-one has ever had a shower there, it may be that getting the idea out there is what matters.

UPDATE: I’ve had a trawl through the published literature. There is not a great deal out there, but this paper argues that drainwater heat recovery is more cost effective than solar hot water heating, and there is sufficient evidence to show that these systems work.

I'm a scientist. Sometimes I get distracted.
View all posts by James →
This entry was posted in Uncategorized. Bookmark the permalink.